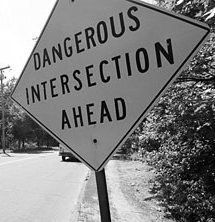 I see this sign on the way to work every day and think: "really!? If the builders of the intersection know it's dangerous why don't they change it?" I imagine the response would be something like: ”It’s too expensive” or “you can’t just change a road…”

We deal with "scary" legacy code all the time. The fact is if it was produced by you or someone else that doesn't matter; it's that it's there.

More often than not we generally try to stay away from the code claiming that it is toxic or that by touching we would cause unforeseen consequences - claiming “you can’t just change a road.” When, in reality, it's just code; bits cast on the grid.

Knowing that there are dangerous intersections, why don't we as devs do something about it, change it, rework it. We have a choice: we can continue to avoid those bits or choose to make them better.

Take this up as a challenge: count in a given day, week or month how many times you or someone else groans about a section of code, functionality, etc... that has been complained about before. Not that you'll be surprised by the result but you may realized how complacent you and other devs have become about dangerous code you're allowing your users to use.

Drop FUD as a tool and pick up something useful in it’s place (such as unit / integration tests or parallel deprecation).

We use hand grenades to fight

Would you ever think a hand grenade thrown wouldn’t break, damage or destroy something? I think in software…

I’ve been wondering... what it would look like if I could close my eyes and pull my physical…