As I sit here listening to the TRON soundtrack I recognize that the flashy code of movies like TRON, anit-trust, hackers and the like have changed the ideal picture of what coding something looks and feels like.

I have to admit, Hollywood makes slamming out bits look cool and easy - not nerd cool like node.js or mongodb but more like socially acceptable "teen" cool like eating Pringles, drinking mountain dew or jolt and getting away with "something." Right now I am snacking on Pringles and drinking mountain dew - the propaganda worked!

Though my boys haven't seen those movies they are familiar with the "hacker" architype of a guy mashing keys having code fly across the screen to save the world from total meltdown! So, as I expected we hit a productivity wall with the "code" part of this project.

Needless to say here is my 6 year old's first lines of code:

and the 4 year old's in the Turtle class:

It took us roughly 30 minutes of them typing (20 minutes) and going through the greenfoot API docs by themselves (10 minutes) to get that done. At this point and time they saw a turtle run left across a white screen and they were done, shutdoor. I expected this so I did have a back up plan....

Making media for the game:
They spent the remainder of or time making trucks, turtles, backgrounds and recording sounds for the game. I wrote the remaining code and added some snips from Michael Kölling's blog. 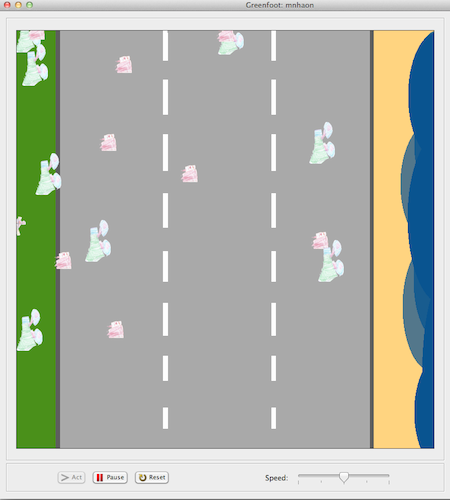 Continuous delivery is... * the ability to put the release schedule in the hands of the business, not in the…