What could a developer say about the end of an 8 year awesome head-spinning journey and the beginning of an amazing God driven adventure?

For the past several months I have felt the absence of peace in what I had been doing at Fellowship Technologies. Not that I wasn't putting my heart into what I did, or that the people aspect was making me miserable or even that the work was a tyrannical laundry list. Quite the contrary, even though sometimes it was a challenge to move forward because of process or technical debt I loved the people I was blessed to work with and I pressed into the work that we needed to do to try and make a difference in the world. 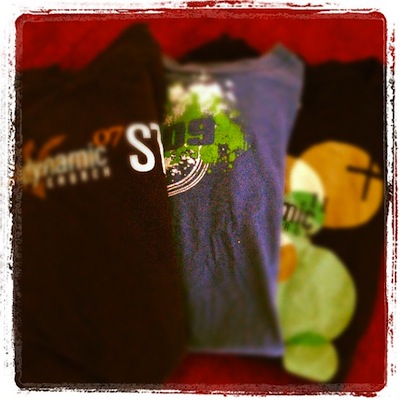 Rewind a little over 8 years ago. I went to interview for a new gig at Fellowship Church in Grapevine, TX for a web developer position because I felt that I would make more of a difference in the world then throwing web bits at Gamestop.com (another awesome gig that I was blessed to have). I had the interview and I didn't feel 100% about it, though that could've been because they were doing some things in classic ASP and talking about moving to PHP.

Later that week I got a call from the guy that I would be replacing and he said, "I liked what I heard in the interview - what do you think about going to do this start up thing with me and some other guys - we'll be writing software for churches..."

I'm sorry, could you say that again? Did you say software for churches? I didn't know there was a need for that. Apparently there was, in a big way.

I joined up, and they threw me and another dev in a closet at the church and... 8 years, 5 conferences, 4 different office buildings, more devs, a billion lines of code, 48 applications, a gazillion (sp?) rows of data, many really awesome people, a whole lot of long nights and foosball games, and one acquisition and IPO - here I stand a changed dev; a changed person.

I'm not going to go into some long diatribe about the hardships I faced because frankly there really were none. Sure there were things I dissagreed with or got frustrated by but Active is a great corporate body trying to solve some really hard problems. So then, why am I leaving?

My first motivation is something I have been fighting for months now - God has been telling me to pick my mat up and move. Bottom line, as a Christian, I could not avoid the pull. I mean, after all why would I move? Great benefits, I was comfortable / confident in what I did, great support system in Texas, loved the people I worked with - why would I not have peace?

Second, my wife and I had grown so much in our marriage with God we could face what a complete family reboot meant - so our hearts were in the right spot for change. We agreed that no matter what, if we disagreed on anything around change we would not do it.

Third, I read and understood the holstee manifesto. I remember talking to my wife telling her that I really felt like I was not good enough to do anything really "great." To which she promptly replied, "You arn't. Quit trying to rely on what you think you know and rely on the plan God has for you." Boom! I love my wife.

After getting the pride smack-down by my beautiful wife. I decided to list out 7 companies that inspired me; that, as a dev, I looked up to. I then wrote a few thoughts down on why I would want to be a part of the amazing work each company was doing.

Flying is learning how to throw yourself at the ground and miss.

New Relic was, of course, at the top of the list. As a dev how could you not look up to and admire the shockwave they have sent through the worldwide developer ecosystem. They have fundamentally changed the way many developers and Ops guys work together - empowering developers worldwide to get better by understanding what is actually going on with, and how to fix their software - who wouldn't want to be a part of making dev life's better?!?

The engineers at new relic have done for monitoring what DHH and Matz did for software - they have revolutionized how we make great bits. New Relic genuinely cares about their people and the developers they serve and it is evident time and time again as we use the software and as I interact with the team. There are some of the most ingenious and brilliantly minded people in that group. It is literally a polyglot's paradise where they have guys who are experts in Ruby, PHP, Python, Java, and .NET and they all work together innovating on an amazing product - there is no company out there like it!

So I took a leap. I was swooned by the amazing team and the love they showed me right up front and the hard to miss excitement everyone had for what they do there.

My family (5 rock solid kiddos and a beautiful and patient wife) and I are doing a complete reboot - moving et. al. Are we sad to be leaving our friends and family, yes definitely. Has it been easy, not entirely but we trust in how we are being led. I am humbled by how orchestrated this entire thing has been from it's beginning until now - we are definitely looking forward to the adventure.

Find me on the Twitters if you ever want to chat about life change or geek out over tech.

So it's dark and you're on some back road driving like you own a light cycle. You come around…

[tl,dr] Ask yourself (and your developers) is what I am doing what I want to do? If I…